Many organizations have complex digital presences. Whether we are talking about an external web presence, an intranet, or an extranet, there are often:

In a rollout, we are attempting to make changes to many or all of these different slices of the digital presence. For instance, in a global rollout of a redesigned external web presence we may want all the country sites to use the new system (for instance, to better share information or to have better brand consistency). Even if not specifically planned in detail, usually the teams rolling out complex digital presences are thinking that some substantial portion of the digital presence will be changes. An incomplete rollout is when some of the sites, site sections, or groups do not actually end up using the new system, or using it in a way that is conducive to business goals.

Although this post is mostly talking about big rollouts involving a lot of sites, the general principles are the same for single sites. If people don’t buy into the structure you create, then they will find ways around it, which will reduce the impact of your implementation significantly.

"Build it and they will come" is not effective

One of the most common mistakes I see is organizations taking a “build it and they will come” attitude to complex digital presence rollouts. This may have worked in the movie Field of Dreams, but it's not the best way to do things for complex digital presences. Often the approach is to build the main corporate site and then expect other sites to magically follow suit.

In this model, the various stakeholders are not meaningfully involved in discussions about what the new digital presence will do, and only receive an announcement that the tool is ready and some vague description of the end state. Two things happen that feed on each other: 1) people don't come into the new system while at the same time 2) the presence ends up being something of Frankenstein's monster, with the various slices of the digital presence not being well connected or effective.

Fundamentally, just building a platform does not mean people will use it. And digital presences—whether it’s an intranet, extranet, or external web suite of sites—require internal participation to make it work.

An example: a global rollout

Let’s say you are rolling out a new global web presence, with dozens of country sites and a main corporate site. You could concentrate on the main corporate site for the initial launch, and then expect the countries to use the same templates as the corporate. This does not work well for a variety of reasons including:

Key problems with the "build it and they will come" approach

Global web rollouts are just an example of where the “build it and they will come” approach is a problem. In general, some problems with building (especially with an example site rather than concentrating on core functionality) and then expecting blanket participation are:

So what is the alternative to the “build it and they will come” model? Set the vision, build the core functionality, and snowball rollout: 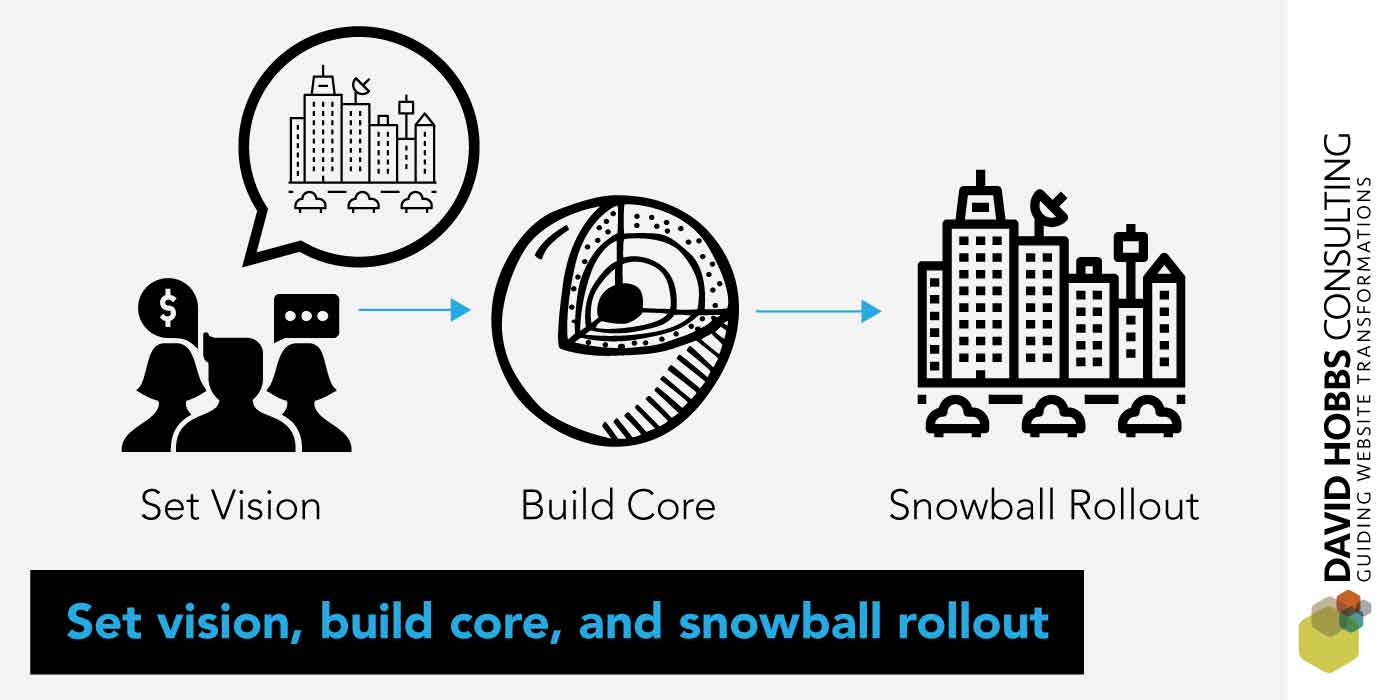 Digital Vision Statements Use this one pager to develop your vision