As a central team, there is absolutely no guarantee that just because you offer a new tool (for example a central CMS) that distributed teams will use it. Yet organizations often take the “build it and they will come” approach when this just is not the case.

There are many common mistakes that are made in global rollouts:

These all boil down to one common issue: not effectively engaging with stakeholders.

Migration: How one particular site or site section’s content is moved from one system to another.

Rollout: How sites are grouped and sequenced along with broader implementation steps.

More of the same, or broad and long term quality improvements

Global rollouts and migrations offer a great opportunity: improving quality. That said, most organizations fall short of the potential of big changes.

In changing quality we want to maximize impact in two ways:

By definition for a global or other distributed rollout we are attempting to include a large portion of the digital presence. That said, as mentioned above it’s not enough to simply build the first site and expect others to participate.

Distributed teams have competing priorities, and one common situation is to make exceptions for some teams (especially the loud or powerful ones), often before the rollout is really in full swing. One of the main problems with this is that it can become difficult to roll out broad incremental changes farther in the future. For instance, influential country sites may start implementing one-off changes since they have the clout to demand it and the resources to implement it. That said, these very one-offs can then make it difficult to rollout broad changes (sometimes for as simple changes as the new logo).

Better engagement isn’t just talking with people more, and in fact sometimes teams resist getting input from stakeholders due to engagement processes that have only led to disappointment for everyone in the past. Engaging with stakeholders is subtle: of course you want to listen to stakeholders but also rise above the churn of complaints about the current system. We want to transcend comparisons of the current system to significant business opportunities. In other words, we need to progressively frame the rollout.

One of the most important opportunities in a major rollout is the opportunity for better engagement over the long term. Ideally the rollout plan makes this happen.

In addition, engagement is of course required for the near term needs of the rollout. There are two components to defining the engagement: what type of engagement and when. This includes defining site deployment processes (from initial contact to site launch) as well as different depths of engagement. Sometimes site owners may be able to decide for certain steps whether they only want to be informed or whether they want a significant two-way discussion.

The importance of framing the problem and opportunities can’t be overstated. Too often the wrong problem is tackled. It’s important to listen, but there are always a myriad of ways that a large project can be approached.

Pulling together a global rollout and migration plan

A global rollout and migration plan should have the following components: 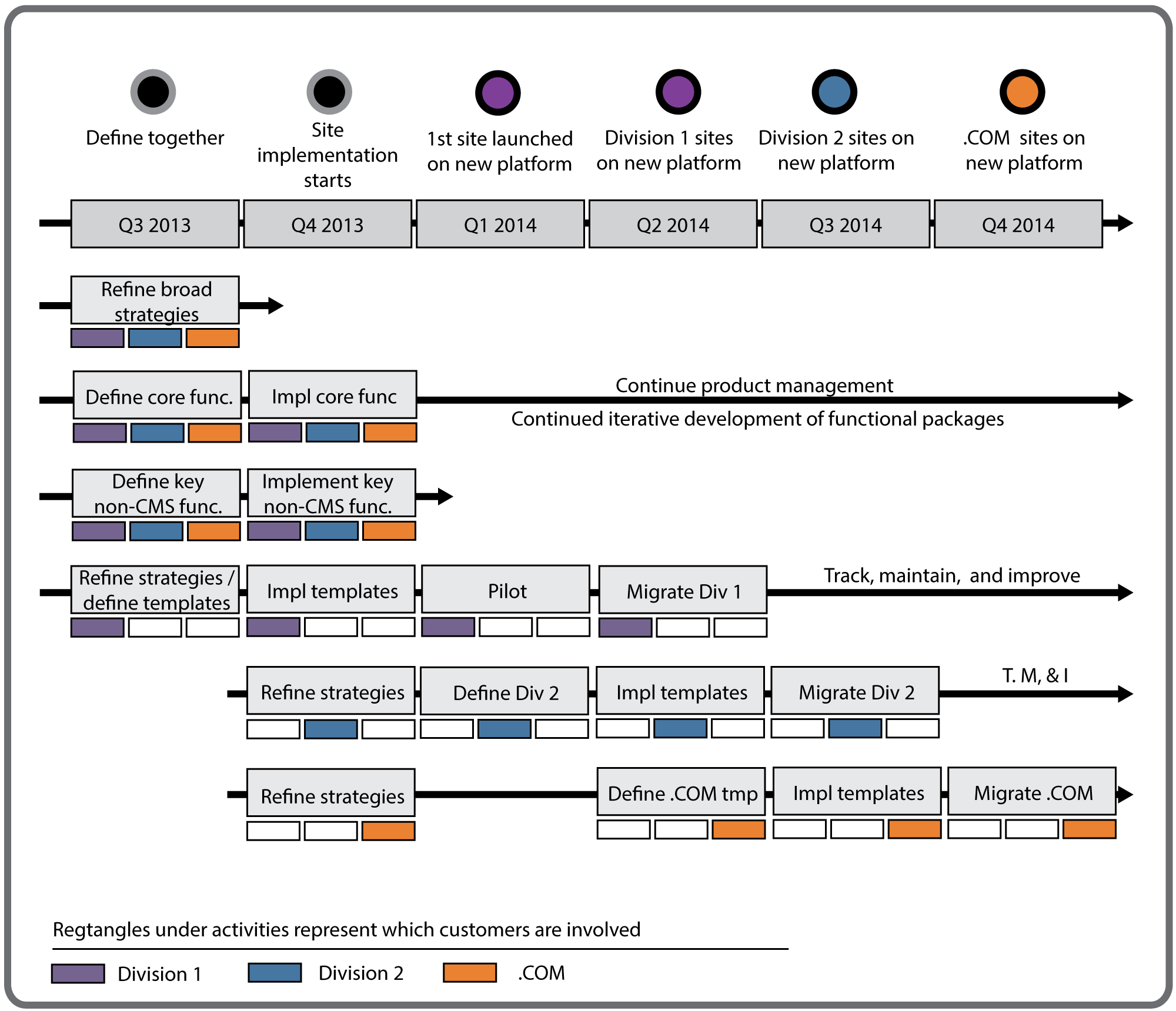 Avoid aiming for the stars only to continue a disjointed experience

Setting the right target is important. Aiming for the stars (for instance expecting a total global rollout on a common platform) and only achieving a piece (for instance only only a smattering of countries with limited resources participating) is less powerful than aiming for a middle ground in the first place (such as defining a content sharing mechanism with people continuing to use their own tools). A global rollout can mean many things, from a fully centralized CMS that everyone uses to enter and publish content and sites to rolling out some common standards.