I am a huge fan of avoiding redesigns, and much of my book Website Product Management is toward that goal by arguing for strong ongoing change. So of course I agree with the sentiment behind writings like Lou Rosenfeld's Redesign Must Die and Carrie Hane Dennison's Never redesign your website again. 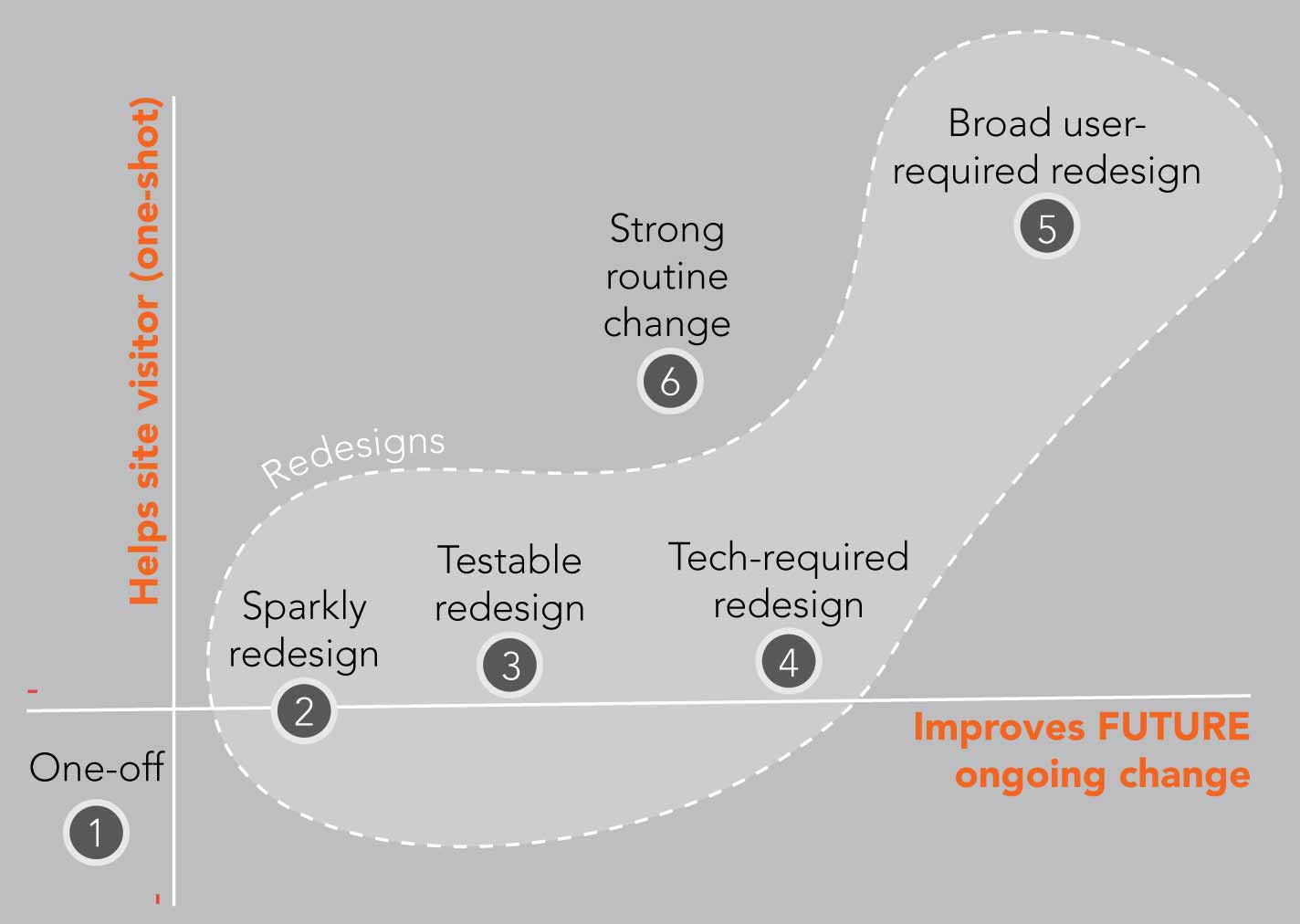 Sometimes redesigns are ok, and even necessary

Even if 99% of redesigns are ill-conceived, some make sense conceptually. For instance, if a web presence has grown to a hydra of microsites, one-offs, and inconsistency then a redesign to align the current hodge-podge is probably needed since an uncoordinated piecemeal response won’t fix it (in which case if the impulse was another one-off #1 then we would want to reposition it as a broad user-required redesign #5).

I would propose the following scale, from worst to best, when we discuss redesigns. Note that I bracket this list with unnecessary one-offs (worse than a redesign) and strong routine change (our end goal) for comparison and also since we may be able to morph these and others to even better approaches:

I raise the scale for two primary reasons:

Put another way, there are two good reasons for a redesign:

Of course the absolute best outcome to the initiation of an ill-advised redesign is to morph it to changing the organization to be better at ongoing change, I would argue that converting the urgent redesign seed into something that does not involve redesign is highly unlikely (if you have accomplished this then please let me know). So we can use any redesign to our advantage so let’s concentrate on that aspect (and redesigns are sometimes required anyway).

I propose that we consider two dimensions when looking at redesigns:

Note that these are roughly graphed based on the ONE-TIME impact. So over the long term continuous change is the most powerful, any particular change has a lower impact than a broad user-required redesign that's structured to allow ongoing change.

Let’s increase the gap between redesigns

I see three ways of increasign the gap between redesigns:

Deep down we probably all know it's not really about the platform itself that causes us problems, and even when it is it's usually the way it is IMPLEMENTED and not the out-of-the-box tool. We need to act that way on a day-to-day and month-by-month basis. The quickest way to inflexiblity is too much flexibility, with quick reaction that on the face of it is being flexible (such as creating some special functionality only for one section of your web presence, which then means that forever the technical team needs to maintain this). When considering changes there are a wide range of factors, but in general you want to keep a relentless focus on ensuring you are having a high impact.

One of the advantages of a regular, recurring cycle of improvements (here I mean one that's outside of just agile sprints) is that it forces creativity. So there may be a desire for a big redesign, but if there's already a scheduled cycle of development for the next three months then teams may agree to simply make a smaller change now (for instance one that gets 80% of the way there for far less effort).

#3. Make the most of any redesign we undertake

Sometimes there really is a need for a redesign, and sometimes there's just an unstoppable urge to redesign. But whatever the reason, we should make the MOST of redesigns when they happen, in particular moving up the scale above. For instance, if the team really does just want a narrow and sparkly redesign, then perhaps it would be possible to hone in on the objectives of the redesign and test it (moving from #2 to #3 on the scale). Or if it's a tech-required redesign, then at least making sure that the change will allow ongoing change but moreover consider if it would be possible to make broad, user-required changes.

Digital Vision Statements Use this one pager to develop your vision